Among all EU citizens, Romanians show strongest attachment to forests and their protection

The majority of respondents say that neither their national governments (66 percent) nor the EU (61 percent) do enough to fight global deforestation. 91% of Europeans and 96% of people in Romania are concerned about forests and wildlife. 88% of respondents in Romania said that their government is not doing enough to combat global forest destruction.

Romanians show a clear lead with 82% of people “strongly agree” with the statement “I really care about forests & wildlife”— by far the highest in the EU, noticeably higher than other countries.

Also, in Romania, 86% of people “strongly agree” with the statement “Deforestation is harmful to the people and wildlife that live in the affected areas”.  This is a much higher score than in other countries, suggesting most Romanians are very much aware of and concerned about the enormous level of forest destruction occurring in their country.

In Slovakia, where forest destruction is also a major issue in the public, it was 69% of people agreeing with this statement, one of the highest in the EU (alongside Bulgaria and Spain)

This results show that people are much more eager to care about forests when they actually still have them in their country – as in Slovakia, Romania and Bulgaria, which still have significant tracts of natural forests.

Furthermore, the numbers went  strongly against the common stereotype that it is only “wealthier” people who care about the environment: the countries with the lowest levels of people saying they “strongly agreed” with “I really care about forest & wildlife” were German, the Netherlands, and Denmark.

On 6th of May, the UN’s World Biodiversity Council – IPBES had cited climate protection as being of equally important than biodiversity preservation and restoration – in a seminal report warning about the threat of mass extinction and loss of natural ecosystems.

The IPBES results and the poll responses make clear, with a view to the forthcoming EU elections, that forest conservation is a an important piece of homework for the EU and its policies.

Thus it is very important to participate in the election to the European Parliament and to strengthen environmental protection and nature conservation in the EU.

On Sunday and Monday, 19th and 20th May 2019, environmentalists from EuroNatur and Agent Green joined with citizens of Bucharest to welcome EU Environment Ministers to Bucharest.

On Sunday, residents of the city, young and old, came together to paint the sidewalk in front of the enormous Romanian parliament building (one of the largest buildings in the world) with pictures and inscriptions calling for the protection of Romania’s magnificent forests. Their messages read that  forests are important habitat, they provide clean air and fresh water and are critical to combat climate change.

With the EU election less than a week away, they showed that it is important to vote and that the EU can and should do a lot to more to ensure the last virgin and old-growth forests of the EU are permanently protected.

Romania’s most famous street artist painted a huge picture in the square right in front of Parliament.

On Monday, activists welcomed EU environment ministers who were meeting in the Parliament. with a banner and a television footage showing the loss from logging in Romania’s forests. A bear held a banner showing a large clear-cut forest with the words “Welcome to Romania” highlighting the situation in the country.

Pedestrians, car drivers and bus passengers all showed their support for forest protection. Passersby stopped, cars honked their horns, and people waved from buses and passenger seats. It was clear that Bucharest residents want to see their forest protected.

For the animals that call these forests home, including bears, wolves and lynx, for the protection of the climate and for all future generations – many young kids who painted on the sidewalk – these forests deserve immediate protection..

We call on the Romanian government with the support of the EU to act quickly to permanently protect these crown jewels of European natural heritage. 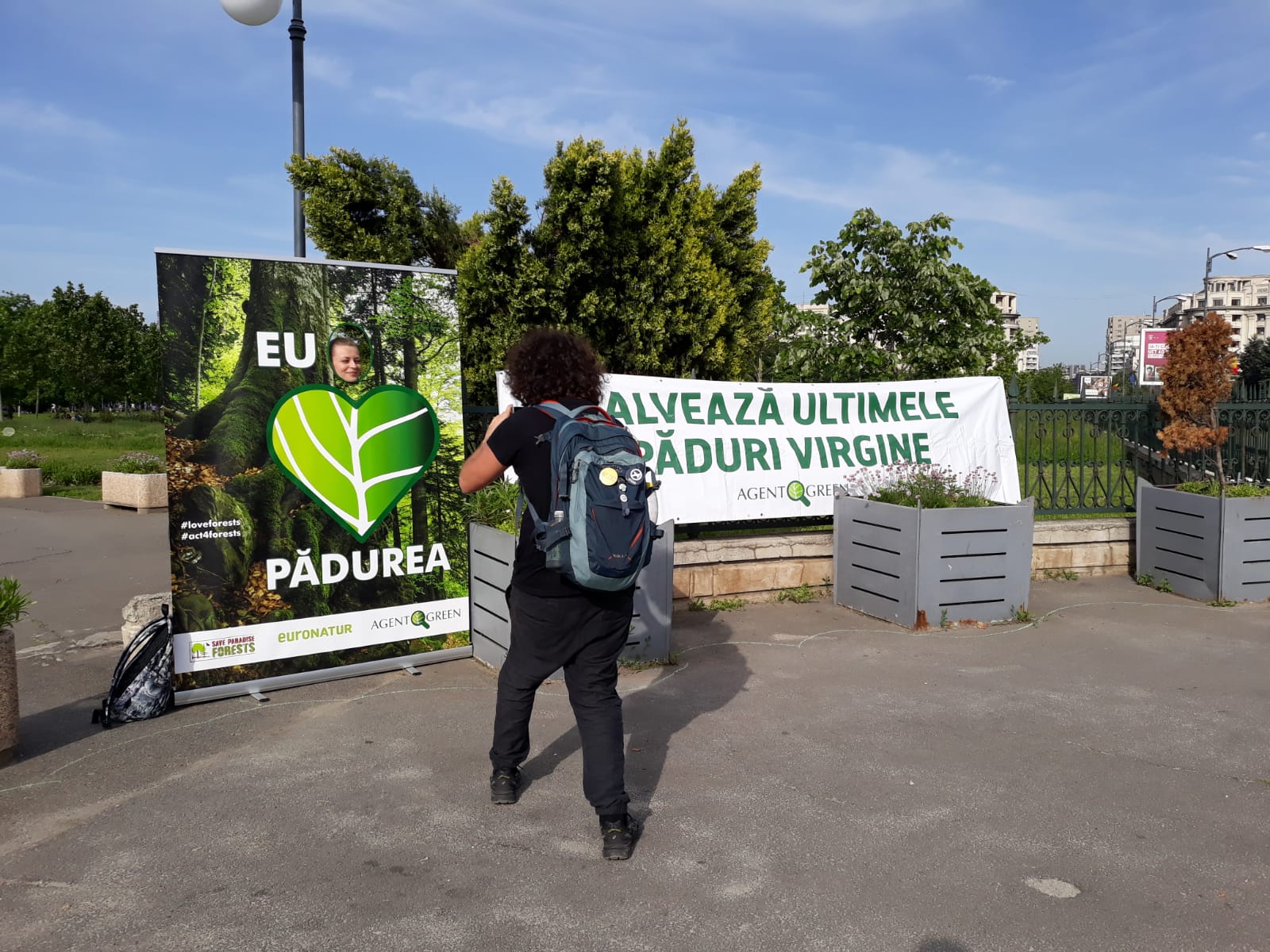 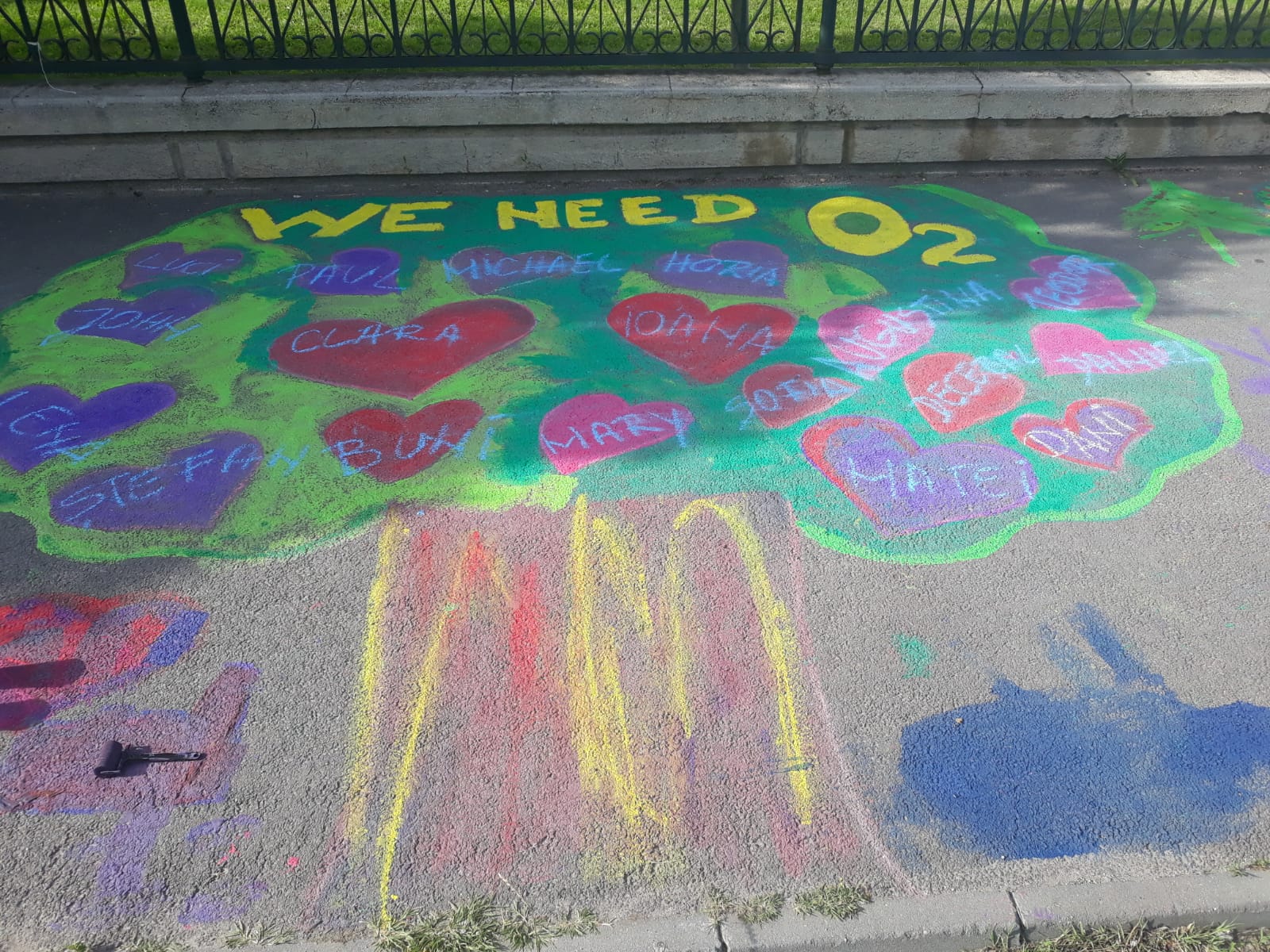 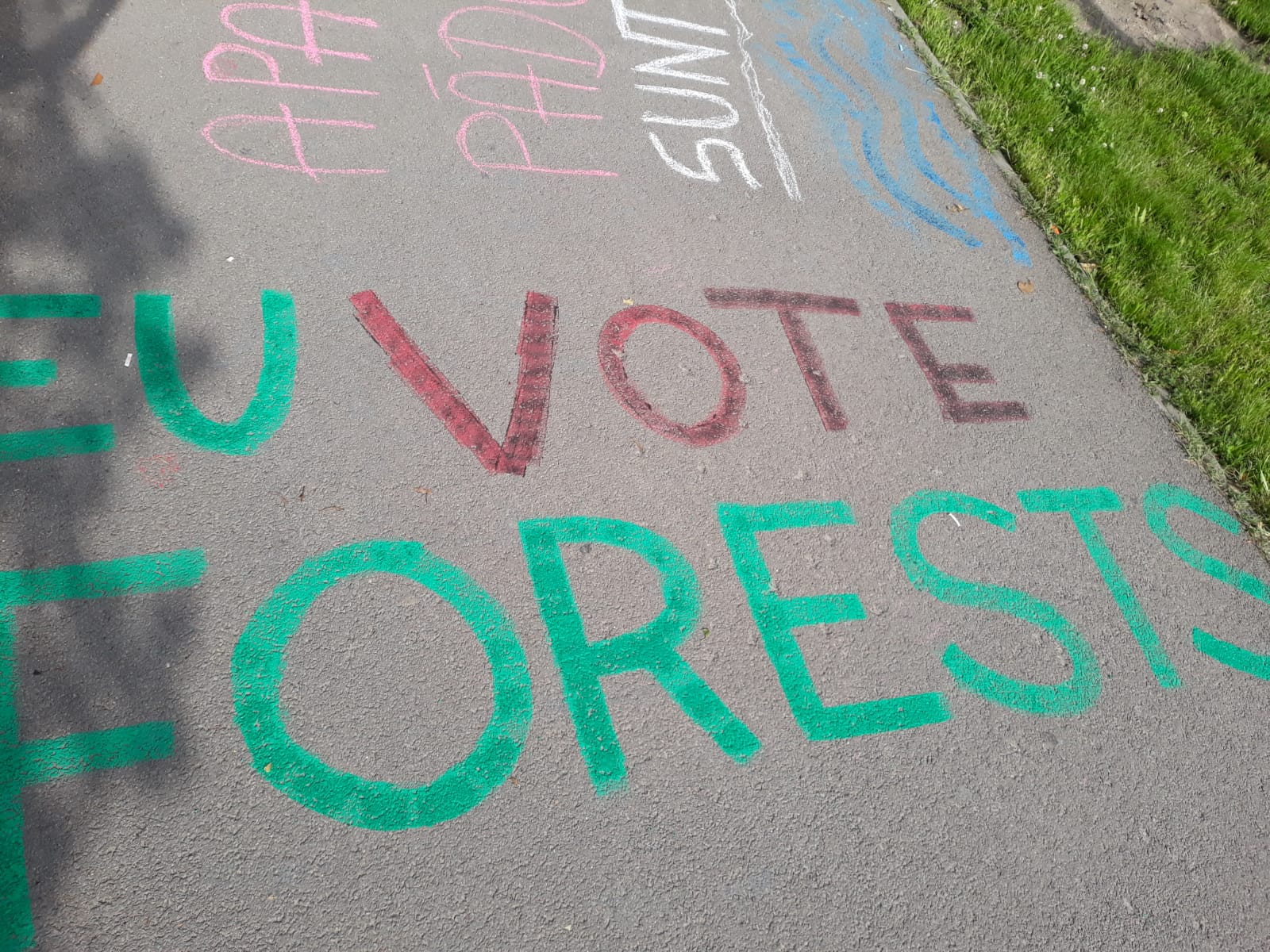 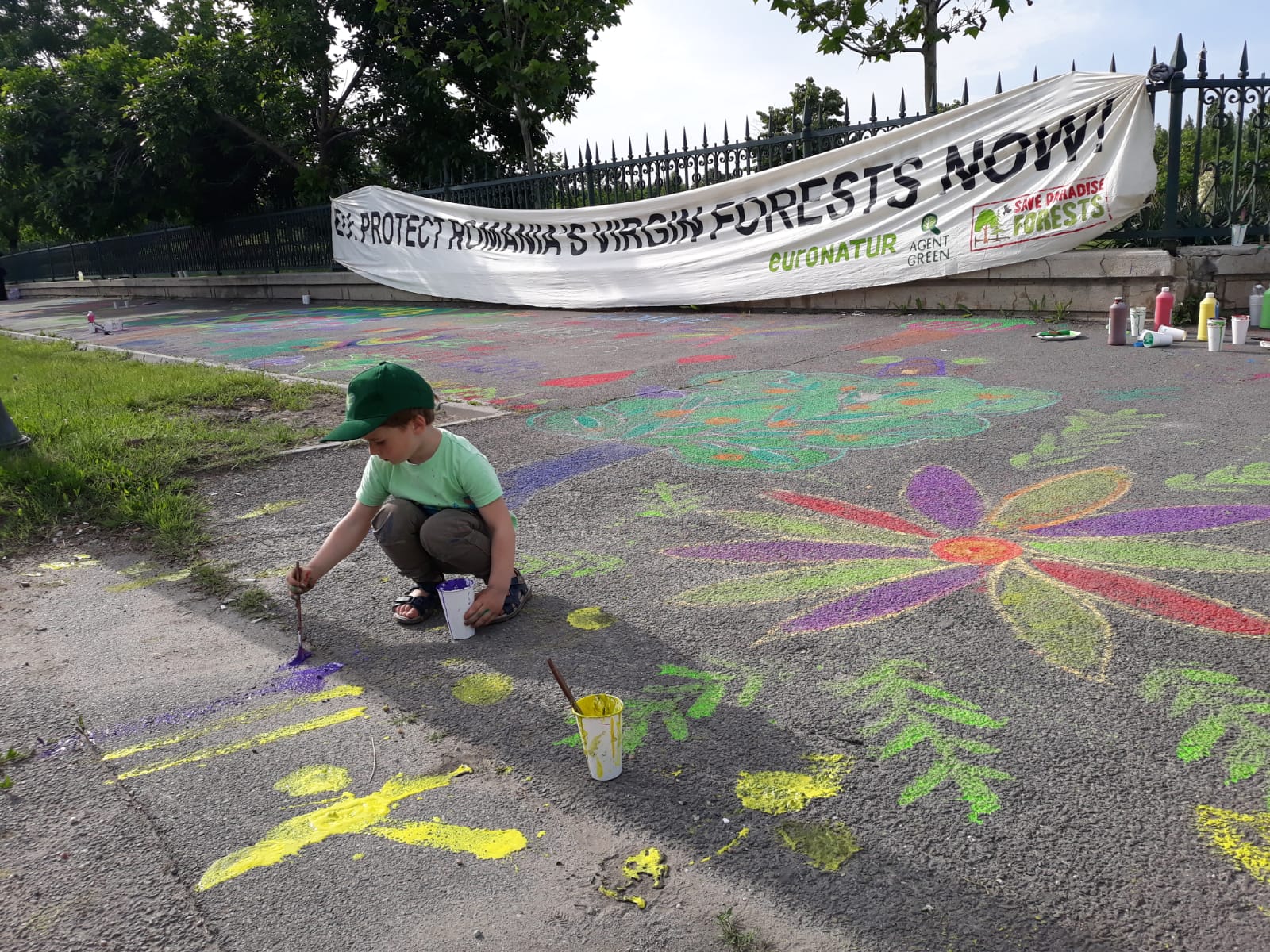 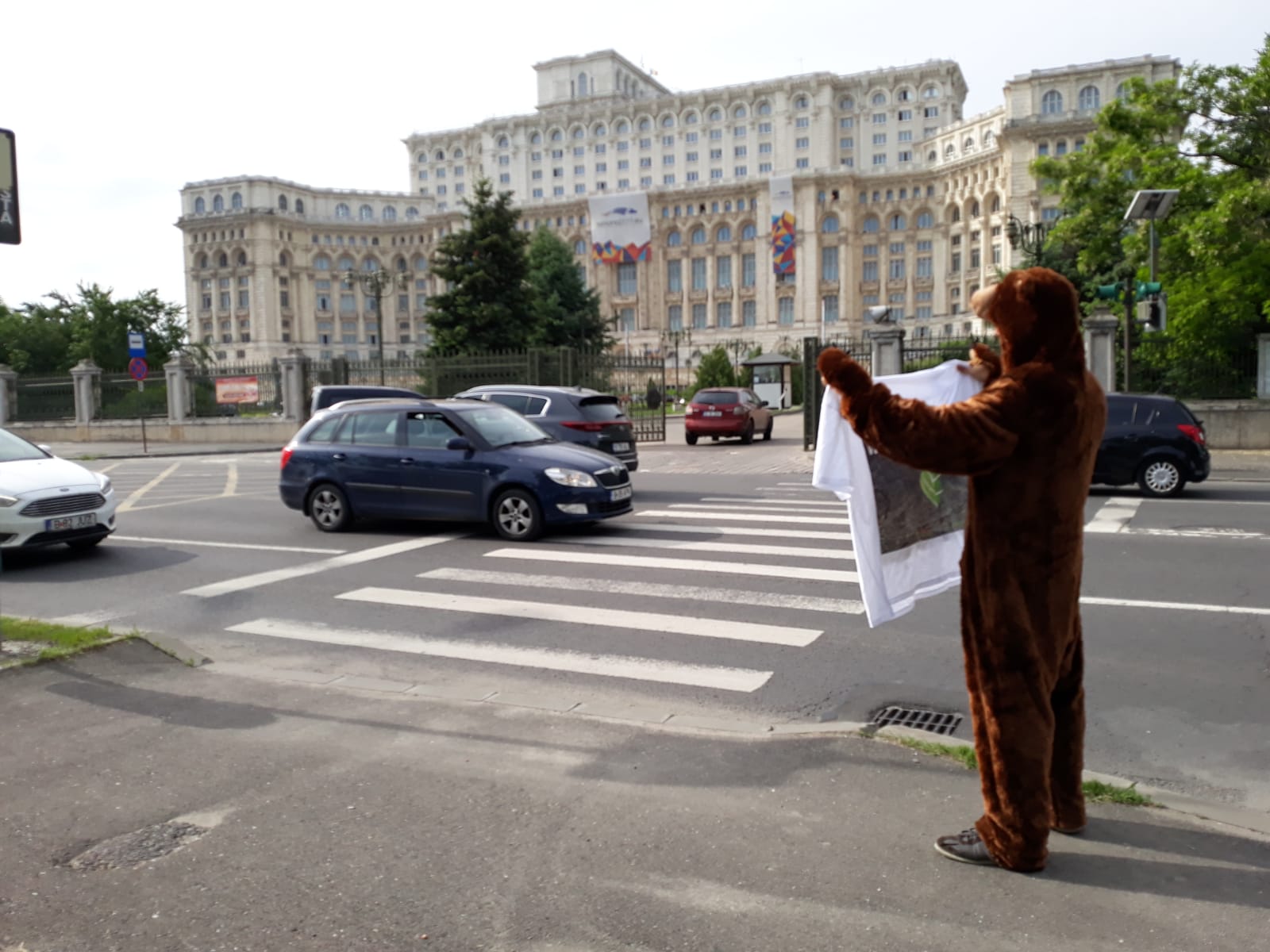 New video evidence published today by environmental NGOs Agent Green and EuroNatur Foundation clearly demonstrates that forest destruction in Romania’s Cheile Nerei-Beusnita National Park is comprehensively out of control. Logging of old growth forests is being deliberately driven by state forest enterprise Romsilva. At least 60 percent of the national park is being treated like a logging site, not as a protected area. Agent Green and EuroNatur Foundation call on the Romanian Ministry for Environment to immediately stop commercial logging in national parks and to dismiss Romsilva from managing protected areas.

Agent Green investigator and journalist Andrei Ciurcanu witnessed the scandalous logging in old forests, destruction of protected travertine-rock sites, inexcusable incompetence and ignorance of nature conservation responsibilities by national park staff, and pressure being applied from state foresters on national park managers and scientists in order to increase logging in the national park.

OUT OF CONTROL #ep3 Cheile-Nerei National Park from AGENT GREEN on Vimeo.

Romania hosts an estimated two thirds of the EU’s remaining primary forests. But huge tracts of logging are continuously destroying this important sanctuary of European natural heritage, even in national parks and EU Natura 2000 protection sites. Romania has been systematically ignoring international obligations like IUCN standards and many thousands of hectares of supposedly protected forests have been destroyed in the last 10 to 15 years. Today, large areas of national parks look like badly managed logging sites.

The major driver of this disaster for nature is apparantly Romania’s state forests enterprise Romsilva, which manages 12 of 13 national parks. All of them suffer from heavy logging pressure. It is clear that the Romanian Government turns a blind eye and tolerates enormous levels of commercial logging on more than 50% of the national park surface.

In the investigative video, the former national park director Stefan Dascalu admits that strong pressure was applied from the state forests administration to increase logging in the so called national park “buffer zones”. The planned strictly protected zone of the park was downsized to only 39 percent due to pressure from Romsilva in order to boost logging areas and volumes. Logging operations with large logs and heavy machines even damaged rare travertine formations, which are under protection by EU legislation. When confronted with the evidence, Romsilva foresters pretended to be badly informed and blamed the national park administration: “We do not know what is protected. It is not our job”, they said. The current national park director physically ran away from the investigation team and information requests regarding logging volumes were not answered.

“Logging in Romania’s national parks spreads like cancer. This scandal is out of control. The Government is doing nothing to protect our natural heritage. It is a national shame that Romania continues to destroy some of Europe’s most precious natural heritage“, Gabriel Paun, President of Agent Green said.

“The logging drama in Romania is currently the most pressing nature crisis in Europe, but still largely unseen. The EU Commission has to become immediately active and involved in order to stop the destruction. After the terrible forest fires in many areas of Europe this summer, the proper protection of our last intact natural forests has become even more important“, Gabriel Schwaderer, CEO from EuroNatur Foundation stated.

Here you can view the previous “Out of Control” episodes about the alarming devastation of Romania’s Domogled – Valea Cernei and Semenic – Cheile Carasului national parks.