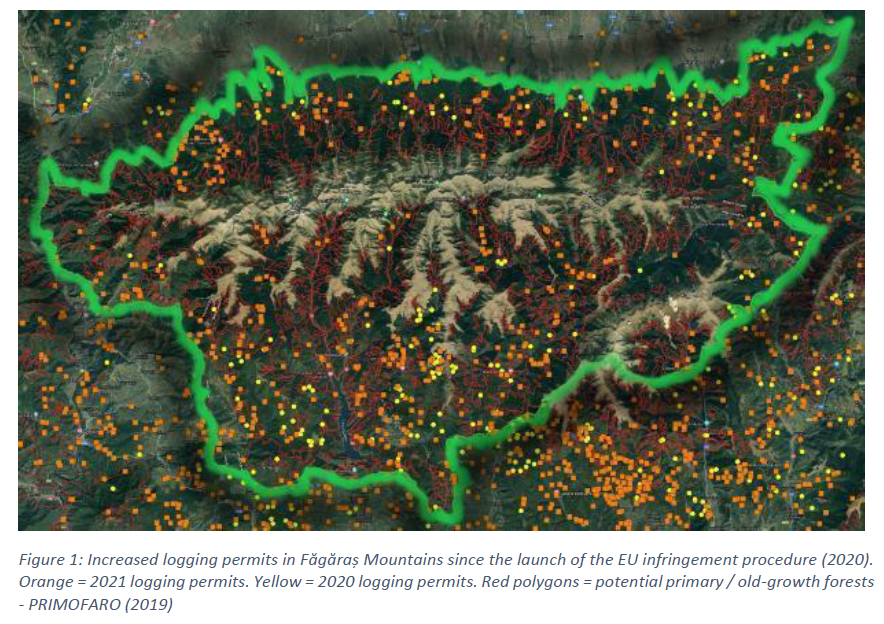 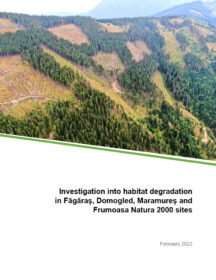 After a legal complaint filed by Romanian environmental NGO, Agent Green in 2019, the Romanian Supreme Court has cancelled logging permissions in more than 7,000 hectares of natural forest in Făgăraș Mountains Natura 2000.

For a number of years, Agent Green, has filed, at their own costs, many legal complaints against logging permissions issued by Ministry of Environment siting violations of national and international legal provisions, such as EU’s Nature Directives.

On November 29, 2021, the Bucharest Court of Appeal annulled the forest management plans for over 7,000 hectares of natural forest in the Avrig Forest District in Făgăraș Mountains, which are under protection by EU’s Natura 2000 legislation. The decision, though welcomed by environmentalists, may be appealed by Romsilva, Romania’s state forestry agency. The court’s decision puts the forests – where logging had been put on hold following earlier because of the complaint – under temporary protection.

“We made the preliminary complaint in 2018 and the court initiated legal action in 2019. The reason for our complaint was that the forest management plan allowed logging in two Natura 2000 sites, without any environmental and Natura 2000 appropriate assessment and because some forest parcels that were identified as potential virgin or quasi-virgin forests were destroyed and had not been classified in the appropriate category. A Ministerial Order from 2012 states that these plots must be preliminary classified in a strictly protected category until the area is studied and it is determined whether or not they are ‘virgin forests’. This did not happen and, tragically, some of these forests have already been destroyed,” Cătălina Rădulescu, the lawyer of Agent Green, explains.

The illegal logging was detected by Agent Green investigators during earlier field visits. Forest destruction was in full operation although the area is theoretically protected by EU legislation – Natura 2000 prohibits deterioration of protected ecosystems and species that are in good conservation condition. It was found that there were no studies in place to assess whether or not the forests meet the criteria for ‘virgin forests’.

Worryingly, the Romanian Ministry of Environment opposed the request to suspend the logging operations, arguing that the cutting of these forest parcels would not cause irreversible damage to the environment. Additionally, the Ministry called the ecological concerns “irrelevant”.

Only after the management plan entered into force – now shown to be illegal –  was documentation compiled that neither involved a proper strategic environmental assessment (as obligatory by EU Strategic Environmental Assessment Directive) nor an appropriate assessment (as obligatory by the EU’s Habitats Directive). Bizarrely, the Ministerial Order approved the documentation several years after the forest management plan had entered into force.

Logging operations in primary and old-growth forests in Romania’s Natura 2000 sites occurs without the legal requirement to conduct prior strategic environmental assessments or appropriate Natura 2000 assessments. This decision by the Bucharest Court of Appeal confirms that logging permissions that were granted without conducting these prior assessments are unlawful.

In 20201, the European Commission has opened an infringement procedure against Romania because of evidence of illegal logging of natural forests in Natura 2000 sites. However, the infringement proceedings have not progressed since July 2020 and forest destruction continues to spread.

This very case and evidence of ongoing destruction of primary and old-growth forest shows that the problem is not at all “solved”. Natura 2000 legislation in Romania has still major systematic enforcement problems and many of the most valuable natural forests in the EU are still being destroyed with the clear knowledge and permission of the state.

“The Supreme Court’s decision clearly shows that the Romanian government has been ignoring the EU’s mandatory legal obligations to protect primary forests and other natural habitats in good conservation status – as well as listed species and their habitats – in Natura 2000 sites. Unfortunately, even the recent legislative changes of the Romanian government do not comply with EU nature conservation requirements. On the contrary, field evidence clearly shows that the wide-spread destruction of primary and old-growth forests in Romanian EU Natura 2000 sites continues and has even increased after the European Commission launched the infringement procedure in February 2020,” Agent Green’s president Gabriel Paun underlines.

“The fact that the Ministry of Environment refused to take measures to protect these extremely valuable and EU-protected forests in the Natura 2000 site Făgăraș Mountains during the trial is unbelievable and shows that the government is not eager to improve forest protection. Therefore, we call on the European Commission to urgently continue the infringement procedure against the Romanian state and refer the case to the Court of Justice of the EU,” Gabriel Paun concludes.

EuroNatur and Agent Green welcome the Glasgow Declaration on Forests as an expression of will of a large number of states including some major drivers of forest destruction to improve forest protection. However, the paper remains vague, the deadline of 2030 comes far too late and signatories – including Brazil, Russia, Canada, US, UK as well as Romania – do not give any details how the implementation will be tracked and how it will be enforced.

“Although the Declaration indicates a potential change in attitude of forest destroyers, it falls short and comes years too late. We cannot wait another ten years for forest destruction to be stopped, an immediate change is needed. Logging needs to end as much in the EU as it does in the Amazon. In many European countries, to a large extent, natural forests have been degraded and converted into plantations of low ecological value over the past centuries. Still, the few remains of natural forests are largely not spared from destructive logging, in particular in countries like Romania or Sweden. It is of utmost importance that the ongoing massive devastation of natural and old-growth forests is being stopped within the next few years. If loggers will get ten more years to operate, a large propoprtion of the EU’s high biodiversity value forests outside strictly protected areas will most likely be gone – a disaster for both climate and biodiversity,“ says Annette Spangenberg, Head of Nature Conservation at EuroNatur Foundation.

“The implementation of the Declaration will be key. Similar declarations on voluntary action to protect forests in the past failed greatly. This new declaration comes after the 2014 New York Declaration on Forests which included the commitment of governments to cut forest loss by half until 2020. Unfortunately, the rate of natural forest loss and destruction has dramatically increased in recent years. Our forests need urgent and bold conservation action now – and a change in forest management from greedy clearcutting to close to nature management. Furthermore, EU needs to ban burning of forest biomass from its list of sustainable and renewable energy sources. Emitting woodborne CO2 into the atmosphere is adding massively to climate heating and is not at all ‘climate neutral’ or ‘zero emission’,“ says Gabriel Paun, President of the Romanian environmental NGO Agent Green.

The Glasgow Declaration focuses on deforestation, which means the permanent loss of forests, e.g. caused by converting land for agricultural use. At the same time, the paper, and thus the signing states, remain largely silent on the devastating impact of ongoing logging of natural forests all over the world. It is using the often misused term of “sustainable forest management” without defining the exact meaning. This however would be important as, technically, even the giant clear-cut areas in Sweden are still counted as “forest” in the official registries and clear-cut forest management is being praised as “sustainable”. Logging of ecologically mature forests results in deterioration of forest biodiversity and carbon storage, similar to deforestation and permanent forest loss.

Very likely, the EU’s forest industry is not going to lose any sleep over the Glasgow Declaration, which will most likely also not lead to an end to clear-cuts in old-growth forests in Romania, Sweden, Estonia, the US or Canada – where those forests are increasingly being logged as the biomass and pellet industry is spreading its business.

EuroNatur and Agent Green call on the European Commission and the EU member states to ensure that the degradation and destruction of natural forests in the European Union by logging is stopped immediately. Strict protection of all old growth and primary forests is also stipulated in the EU Biodiversity Strategy 2030. However, many of the EU member states such as Romania, Finland, Poland or Sweden continue to log natural forests on their territories – also in state-owned forests. This must be ended immediately. Signing nice-worded papers while at the same time actively pursuing the destruction of nature is hypocritical and unacceptable.

EuroNatur and Agent Green also call on the European Commission to accelerate the EU infringement procedure against the Romanian State to ensure that the destruction of EU Natura 2000 protected natural forests is stopped before it is too late for many precious forests and that the Glasgow Declaration on Forests does not wait another minute to be implemented.