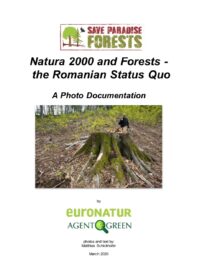 Environmental organisations EuroNatur, Agent Green and ClientEarth have revealed the catastrophic scale of illegal logging of old-growth and primary forests in Romania’s Natura 2000 protected areas in a new complaint submitted to the European Commission.

The organisations have today submitted a complaint against Romanian authorities stating that the government’s lack of action to address extensive logging of primary and old growth forests within protected areas is leading to irreversible loss of unique habitats and species.

Romania hosts two-thirds of Europe’s remaining primary and old-growth forests of the temperate climate zone. These precious ecosystems, protected by European law as Natura 2000 sites, are being systematically destroyed by large-scale logging operations.

ClientEarth wildlife and habitats lawyer Ewelina Tylec-Bakalarz said: “Intensive logging, approved by the Romanian authorities and carried out by state forestry, Romsilva, has caused serious deterioration of habitats and species protected under EU Nature Directives. Logging continues to be an ongoing threat to Europe’s most unique ecosystems and a striking violation of EU law.”

The legal action follows previous complaints which led to the European Commission launching infringement proceedings against Romanian authorities over their systemic and continuous failure to protect one of Europe’s last natural forests.

Gabriel Schwaderer, Executive Director of EuroNatur said: “Our current complaint provides the European Commission with new evidence proving that illegal logging is causing a profound environmental crisis affecting many protected areas in Romania. We hope that it will allow the Commission to intervene sooner, because now might be our last chance to take action before damage of these unique ecosystems becomes irreversible.”

The evidence obtained by the environmental groups reveals the devastating impact of logging protected forests. In Natura 2000 sites in Făgăraș and Domogled, the majority of analysed habitats showed severe signs of deterioration. In the Natura 2000 site in Maramures the researchers have documented over 10,000 hectares of clear-cuts.
Veronica Tulpan of Agent Green said: “There are whole mountains where the forest habitat has been completely removed and all of the wildlife along with it. We need a rapid intervention from the Commission to start applying the nature directives in Romania properly.”

Tylec-Bakalarz concluded: “The situation in Romanian forests is dire, but the case taken to protect Poland’s Bialowieza Forest gives us hope. It proved how effective European law can be in safeguarding of our continent’s natural wonders.”

Video evidence about the fate of Romania’s Natura 2000 sites

● Romania still has more than 525,000 hectares of potential old-growth and primary forests, which is more than any other EU member state (outside Scandinavia).

● Around 300,000 hectares of the Forests identified in the Primofaro inventory of Romanian woods are listed as Natura 2000 sites. Many protected animals such as large carnivores, black stork, owls, woodpeckers, bats and beetles depend on them for survival.

● The campaign “SaveParadiseForests“ aims at protecting the most valuable old-growth forests of the Carpathians, particularly Romania. It is jointly coordinated and carried out by the NGOs EuroNatur (Germany) and Agent Green (Romania).

Resources:
Briefing paper on the complaint to the European Commission

About EuroNatur:
EuroNatur is a nature conservation foundation based in Radolfzell, Germany. Our efforts for a Europe with free-flowing rivers, ancient forests and a rich variety of cultural landscapes are transboundary in nature; we strengthen local conservation organizations and create international networks between them. Together with our Europe-wide partner network we create solutions that allow humans to live and work in harmony with nature. Our aim is a powerful network committed to protecting our European natural heritage.

About Agent Green:
Agent Green Association is a non-profit NGO for environmental protection and biodiversity conservation founded in 2009 in Romania. Established to protect Retezat Mountains, one of the last intact forest landscapes in the temperate climate of Europe, Agent Green evolved into carrying out investigations, scientific approach, strategic cooperation and effective campaigns targeted at bringing about positive and lasting change for nature.

About ClientEarth:
ClientEarth is a charity that uses the power of the law to protect people and the planet. We are international lawyers finding practical solutions for the world’s biggest environmental challenges. We are fighting climate change, protecting oceans and wildlife, making forest governance stronger, greening energy, making business more responsible and pushing for government transparency. We believe the law is a tool for positive change. From our offices in London, Brussels, Warsaw, Berlinand Beijing, we work on laws throughout their lifetime, from the earliest stages to implementation. And when those laws are broken, we go to court to enforce them.

Bucharest/Radolfzell. The failure of Romanian Government to protect the country’s remaining virgin forests following 21 years of resistance and hesitation is starkly revealed in a report, Failing our Last Great Forests, released today by Agent Green and EuroNatur.

The report analyses data related to Romania’s “National Catalogue of Virgin and Quasi-virgin Forests” and uncovers a history of clear dereliction of duty and mismanagement that has directly lead to the logging of Romania’s irreplaceable virgin forests.

The first attempt to preserve these forests dates back to 1999 when the National Strategy for Sustainable Development aimed to preserve at least 400,000 hectares of virgin forests. To date, only 30,062 hectares, or less than 8%, have been protected in the National Catalogue. Agent Green and EuroNatur estimate that at least 110,000 hectares of such forests have been lost in this time.

“This failure of nature protection is not an accident. It highlights a complete lack of political will at the cost of the disappearance, before our eyes, of Europe’s last great forests. Of the few forests protected, many are the result of formal complaints to Forest Guards and public scandals we made in the mountains of Semenic, Tarcu or Godeanu, forests like Cosava Mica, Higeg, Hidigel, Radoteasa and others”, says Gabriel Paun of Agent Green.

The report unveils details of 24,260.56 hectares of virgin forests for which NGOs and scientific organisations, invited by the Government, have authored and submitted for inclusion in the National Catalogue. Incredibly, these studies, representing 80% of all studies submitted, have been either rejected, blocked, returned, and, in the most perverse of situations, lost by the authorities at various stages of the listing process.

It must be noted that scientists have undertaken painstaking research over long time periods of time, often working in difficult remote locations at substantial cost, to submit their work for approval. That their studies have even been lost by Romanian officials is contemptuous of their profession.

Correspondence with Romanian officials has revealed a stark contrast in numbers of reports received and acknowledged between different government entities. The Ministry for Environment claims they have only received studies for 42 forest areas relating to 9,382.70 hectares. Romania’s Forest Guard acknowledges acceptance of studies for 105 areas covering 24,260.54 hectares. No explanation is given for the inconsistent data.

“We are dealing with a Bermuda Triangle syndrome in Romania. The virgin forests are disappearing. For example, ancient forests of Coltii Balei in Buzau county were originally accepted to be part of the Catalogue but all evidence of their existence has simply disappeared”, added Paun.

“The approval process for the “National Catalogue of Virgin and Quasi-Virgin forests” has been grossly unprofessional and abjectly mismanaged. Temperate Europe’s last large tracts of primary and old-growth forests deserve the highest level of protection and caution. Time is of the essence for their survival, yet bureaucratic hurdles and severe mismanagement reveal a systemic lack of both care and seriousness regarding the protection of Romania’s unique forest heritage. The responsible officials have clearly failed in their roles to protect forests within the Catalogue”, said Gabriel Schwaderer of EuroNatur.

EuroNatur and Agent Green call on the Romanian Environmental Ministry to immediately preserve all remaining primary and old-growth forests. At a time when Romania is the subject of an infringement with the EU regarding the loss of primary forests in Natura 2000 sites, this is the first step to remedy this disastrous situation. This would also help Romania meet its obligations under the Convention on Biological Diversity and contribute to upcoming EU wide conservation targets of strict protection of 10 % of terrestrial and marine ecosystems.

Background information:
The report Failing our Last Great Forests can be found here: LINK
The campaign “SaveParadiseForests“ aims at protecting the most valuable old-growth forests of Romania. It is jointly coordinated and carried out by the NGOs EuroNatur (Germany) and Agent Green (Romania).

The PRIMOFARO report (PRIMary and Old growth Forest Areas of Romania) by EuroNatur and Agent Green shows that Romania still host more than potentially 525.000 hectares of old growth and virgin forests, more than any other EU member state (outside Scandinavia).