Agent Green, EuroNatur and Client Earth have filed EU complaints against the Romanian government because forest management plans in Romania do not comply with the EU Nature directives and the Strategic Environmental Assessment directive. The European Commission has responded to this complaint in February 2020 and launched an infringement procedure against the Romanian state.
The EU Biodiversity Strategy 2030, which was presented by the European Commission in spring 2020, aims to protect all “old growth and primary forests” in the EU. Romania’s forest treasure is one of the most important contributions to this goal – if the ongoing scandalous old growth forest destruction is stopped immediately.
But the ignorance of Romanian forestry about forest protection legislation continues …

However, there are also successes coming in:
Recently, two legal disputes resulted in High Court rulings suspending the management of forest plans in both the Domogled – Valea Cernei National Park and Natura 2000 site as well as the neighboring Natura 2000 site “Nordul Gorjului de vest”. In these protected areas there are still some larger tracks of old growth and primary forests with a very high biodiversity value.

Agent Green has started a lawsuit against the Ministry of Environment and National Forest Administration RNP Romsilva to suspend (“anulment”) logging on an area of almost 20,000 hectares in Domogled National Park – Cerna Valley. The High Court of Cassation and Justice granted an injunctive relief in February this year and suspended the respective forest manegment plans. However, RNP Romsilva appealed against the court ruling. Now, the High Court of Cassation and Justice rejected the revision request made by RNP Romsilva.

This time the decision is final and the old growth forest is safe. Thanks to Agent Green’s lawyer Catalina Radulescu, the forest management plans of Baia de Arama Forest Department, Mehedinti County are suspended until the “anulment case” will be finalized. The primary and old-growth forests of this area are being protected from chainsaws for this period – and hopefully forever.
(Orginal file: here)

Another 14,612.36 hectares of forests are saved from logging in West Gorj Mountains (Mehedinți and Vâlcan Mountains) following a lawsuit initiated by Agent Green. On May 15 2020, the High Court granted an injunctive relief and suspended all logging plans until the “annulement case” – permanent suspension – is finalized. However, logging continued illegally in full ignorance of the court decision.

In July 2020, Agent Green informed the forest guard that the logging was continuing illegally. The officials finally checked the logging locations and ordered to stop any forestry work.

The saved 14,612  hectares of forests overlap with a part of the Domogled – Valea Cernei National Park (and Natura 2000 site) and with the Natura 2000 site “Nordul Gorjului de Vest” in remote Vâlcan mountains.

Unfortunately, the order of the Forest Guard only stipulates that the logging must be stopped, but not when. Neither the damage caused nor fines and penalties are mentioned. Thus, the fight to protect these extremly valueable forests continues as the court’s decision is not final.

Members of the European Parliament join NGO’s EuroNatur, Client Earth and Agent Green as well as the Director of DG Environment of the EU Commission to discuss status and future of EU’s last old growth and primary forests – September 24, Brussels

Most of the old-growth and primary forest remains in the temperate climate zone of the EU are located in the Carpathians – mainly in Romania, Slovakia and Poland.
A new inventory of Romania’s old- growth and primary forests, commissioned by EuroNatur Foundation, has revealed a huge extent of close-to-nature forests – and their threat from logging.

These forests are an outstanding biological treasure and capture huge amounts of carbon. The IPBES „Global Assessment“ report (May 2019) made clear that the global protection and restoration of na- tural ecosystems is equally important to tackling the climate crisis. However, logging of the EU’s last intact natural forest ecosystems proceeds at a rapid pace, including within Natura 2000 sites.

The European Court of Justice (2018) stopped logging activities in Polands Bialowieza Natura 2000 site due to the legal breaches of the EU‘s Habitat and Birds Directives. But what will happen to the rest of the EU‘s natural forests in Natura 2000 sites? Will the EU fulfil its own environmental responsibilities and act to protect our last old-growth and primary forests?

Therefore, we kindly invite you to join the high level event on September 24 with Members of the European Parliament, the Director of DG Environment of the EU Commission and NGO experts to contribute to the discussion about the future of Europe’s most valuable forests.

Please note that you need to register, if you do not have an access badge (see details below).

Thank you for sharing this information! 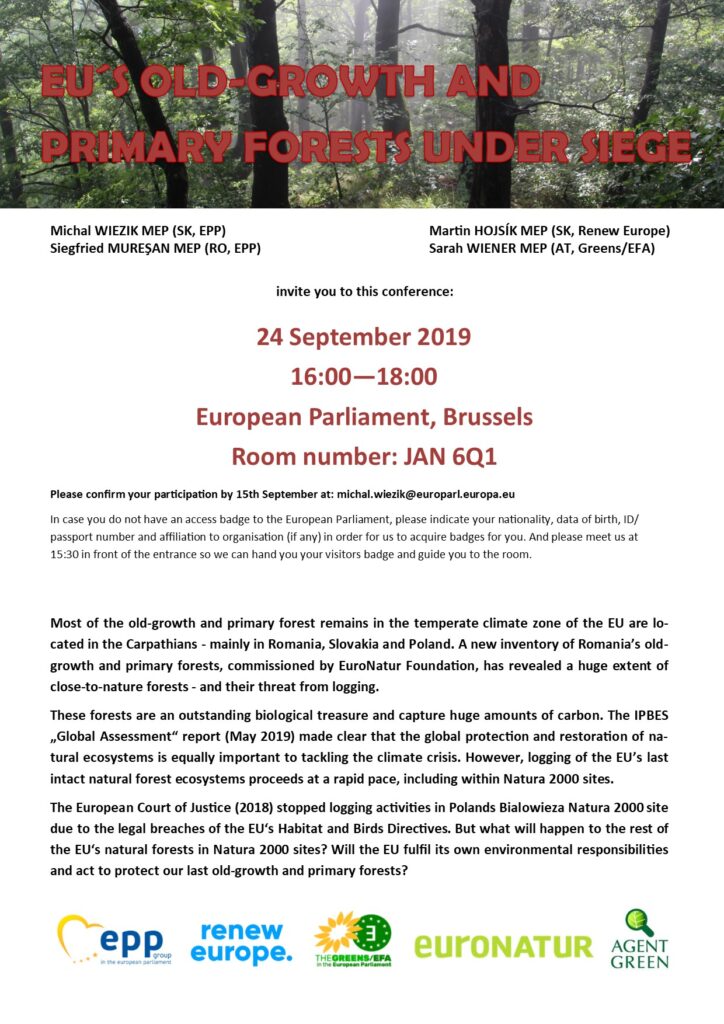 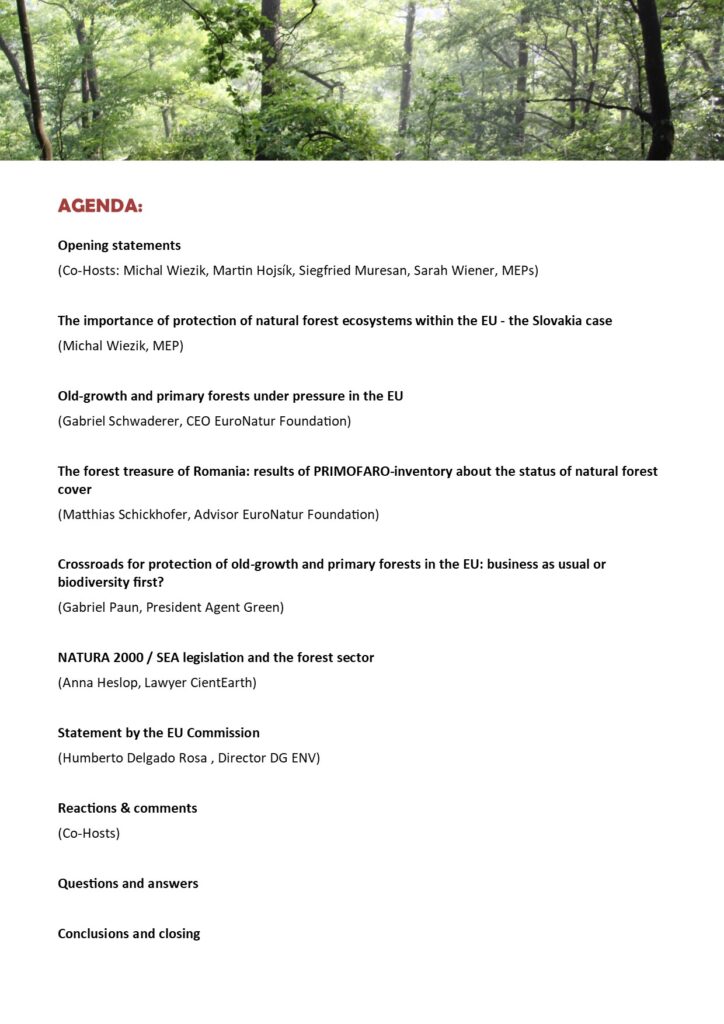