In a gesture of solidarity with journalists and environmental activist, Tiberiu Bosutar, who were violently attacked in an investigation related to the theft of wood from a private forest, several volunteers of environmental organizations Agent Green, Declic and Greenpeace arrived in the commune of Panaci, Suceava county, the closest locality to the place where the incident took place.

Participants point out that such violent incidents against the freedom of the press and forest defenders must cease. At the same time, they urge the Ministry of Interior to treat the case with the utmost seriousness. “The truth needs to come to light as soon as possible. Future generations deserve the chance to grow up in a better society where we all feel safe, protected and respected by the authorities,” conservationists underlined.

“Today’s action is one of solidarity above all else. Solidarity with journalists investigating topics related to illegal logging and environmental activists who are at the forefront of the fight against the wood mafia. Globally, last year, 227 environmental activists were killed. If we do not take these incidents seriously, Romania may join this blacklist soon enough. To prevent this. the authorities must treat the incident in Suceava with the utmost seriousness and strongly condemn such actions now and in the future “, said Mircea Barbu, Agent Green investigator. 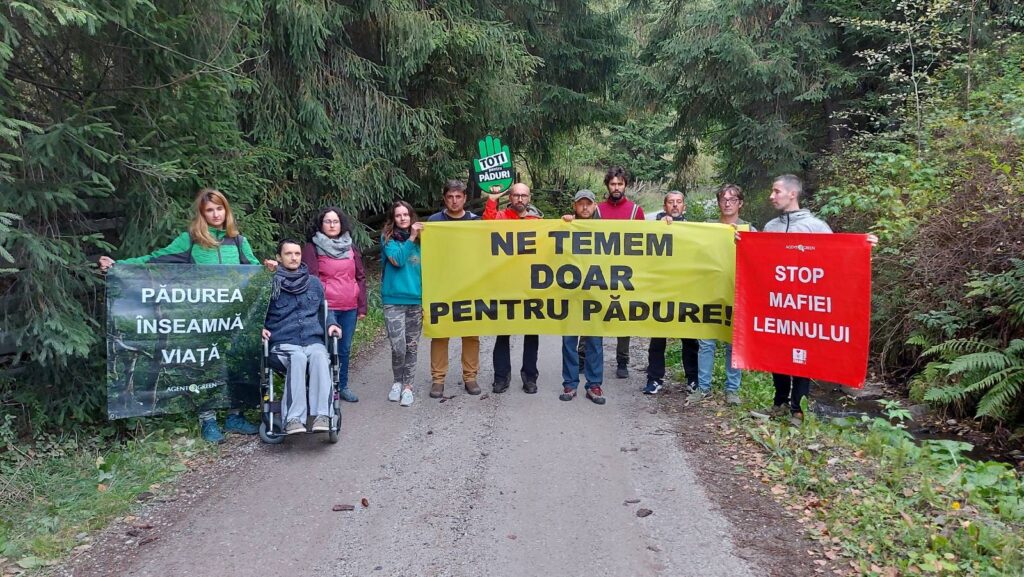 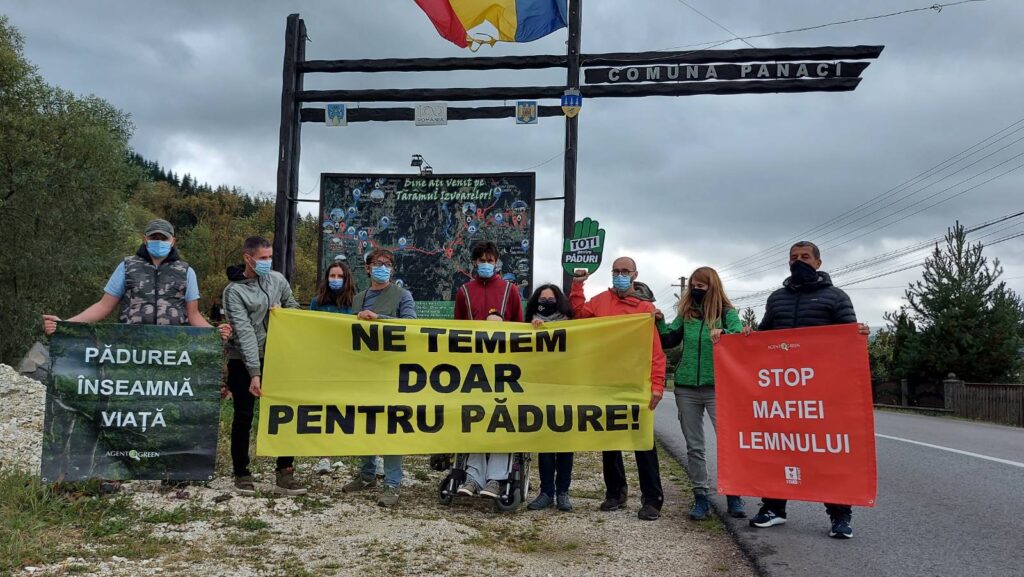 Report about Reactive Monitoring Mission in 2019 published only recently: Romania does “not meet” international guidelines

A few days ahead of the International Day of Forests on (March 21) a “Report on the joint World Heritage Centre / IUCN (International Union for Conservation of Nature) Reactive Monitoring Mission to Albanian and Romanian component parts of the transnational World Heritage Property ‘Ancient and Primeval Beech Forests of the Carpathians and other Regions of Europe’“ was made available to the public.
The mission, visiting Domogled-Valea Cernei and Cheile Nerei-Besnita National Parks/UNESCO properties, took place in November 2019.

However, the report was only just made publicly accessible. It is not clear what the reasons for this massive delay are. Could it be that the critical conclusions of the UNESCO/IUCN experts with regard to the intensive logging operations in the buffer zones of Romanian UNESCO component parts caused controversy?

The document states: “The mission concludes that the current management of the component parts’ buffer zones does not meet the requirements of the Operational Guidelines (OG) in a satisfactory way and may have negative effects on the integrity of the transboundary property. The current forest management should seek to better support the natural processes and be based on strengthening and expanding ancient and primeval beech forest ecosystems over time.“

UNESCO and IUCN also urge Romania to “strictly protect all ancient and primeval beech forest ecosystems that have not been included in the property, in order to foster the long-term preservation of those exceptional ecosystems; priority should be given to those located in proximity of the components visited by the mission, to enhance connectivity.“

This mission was triggered by numerous media reports and formal complaints from EuroNatur Foundation, Agent Green and many other conservationists concerning destructive logging of old growth and primary forests in UNESCO buffer zones, even in close vicinity to the UNESCO core protected areas. Commercial wood exploitation authorized by the Romanian state in the buffer areas affects biodiversity rich and mature forests with an equal “universal value” to the beech forests included in the UNESCO site (core area).

The joint UNESCO/IUCN Mission in 2019 was preceded by an informal IUCN Europe field visit in November 2018, where intensive logging operations in highly valuable old growth beech forests in Domogled-Valea Cernei and Semenic National Parks/UNESCO site component parts, including in buffer zones, were confirmed.

On top of the EU infringement proceedings against the Romanian state (launched by the European Commission in February 2020 due to deterioration of EU protected areas by logging), the clear findings of UNESCO and the IUCN are just another indicator that protection of high biodiversity value forests in Romania is in a catastrophically bad state.

The intensive logging operations in the Romanian World Heritage buffer areas ultimately endanger the existence of the entire transnational World Heritage site for the protection of the European primeval and ancient beech forests, which consists of 67 component parts in 12 countries …

EuroNatur Foundation and environmental organisation Agent Green interpret the findings of the report as “crystal clear evidence” that Romanian state forestry enterprise, Romsilva – the agency in charge of both logging in Romania and management of almost all Romanian national and nature parks – is “not capable” of managing protected areas for conservation of highly valuable ecosystems appropriately. The long record of controversies and the poor state of many protected areas under custody of Romsilva shows that the company is “obviously driven by commercial interests and fundamentally lacks ambition and expertise regarding nature conservation”.

Therefore, Romsilva needs to be immediately removed from all duties for protected area management. Management of Romania’s protected areas should be taken over by official national bodies (such as National Agency for Protected Areas) and equipped with adequate funding to ensure conservation objectives are met. Logging in buffer zones on state property needs to be halted until new management plans  in line with UNESCO/IUCN guidelines are developed. Management plans of all UNESCO World Natural Heritage properties, as well as national parks need to be revised following the recommendations by the UNESCO/IUCN report.

“The World is celebrating the International Day of the Forests on March 21. Romania’s outstanding natural forest heritage is one of the most valuable ecological treasures of Europe. Romania must act accordingly and stop logging primary and old growth forests. And the EU needs support Romania with adequate means for compensation of private land owners,” EuroNatur and Agent Green conclude.

In detail, the final report by World Heritage Centre and IUCN concludes with the following recommendations:

UNESCO/IUCN also call on the Romanian State Party, to “combat and prosecute any illegal logging activities in the two national parks“, “abandon plans to upgrade the national road 66A, due to the potential impact of this project on the property’s integrity” and “inform the World heritage Centre of any proposal to extend or upgrade hydropower facilities within the property’s components and their buffer zones, before any decision is taken“.

On March 4 2019, a landmark lawsuit against the European Union was launched in Brussels to challenge the new EU Renewable Energy Directive (RED 2). Plaintiffs from the five European Member States Romania, Ireland, Slovakia, France and Estonia are charge that the EU’s 2018 Renewable Energy Directive (RED II) will devastate forests and increase greenhouse gas emissions by promoting burning forest wood as renewable and carbon neutral.

The legal case, which will be filed in the European General Court in Luxembourg, cites scientific evidence that wood-burning power plants pump more carbon dioxide (CO2) into the atmosphere per unit of energy than coal plants. The EU policy does not count the CO2 emissions from burning biomass fuels for heat or energy, making it appear that These methodas are more climate-friendly than fossil fuels. The plaintiffs are asking the court to annul the forest biomass provisions of RED II in order to render the burning of forest wood ineligible for EU Member State as they try to meet the renewable energy targets and subsidies.

“The EU’s policy relies on the false and reckless assumption that burning forest wood is carbon neutral,” said Dr. Mary S. Booth, director of the Partnership for Policy Integrity, and lead science advisor on the case. “However, scientists from around the world, including the EU’s own science advisors, warned that burning forest wood actually increases emissions relative to fossil fuels.”

“The lawsuit we are filing today alleges the EU’s policy fails to comply with nearly all of the principles for environmental policy that are laid out in the Treaty of the Functioning of the EU, including that policy should be based on science, address climate change and embrace the principle that polluters pay,” said Raul Cazan, from 2Celsius in Romania, one of the NGO plaintiffs. “It’s hard to imagine a more counter-productive policy than burning forests for fuel.”

An overview about the details of the case can be read here.

“We’re in a climate emergency that the EU is exacerbating by treating forests, virtually our only carbon sink, as fuel,” said Peter Lockley, legal counsel for the plaintiffs. “This favored treatment is expanding forest cutting, which in turn is impacting peoples’ property, rights, and livelihoods. It’s vital that people affected by this damaging law are allowed to come before the EU court to challenge it.”

In accordance with Intergovernmental Panel on Climate Change (IPCC) recommendations for maintaining a livable climate, the European Commission has called for a climate-neutral EU by 2050, requiring the balancing of greenhouse gas emissions and uptake into carbon sinks, mostly forests by that point. Under RED II, the EU is required to generate at least 32 per cent of its energy from renewable sources by 2030 to help reduce carbon emissions by 30 per cent in comparison to 1990 levels.

However, biomass energy is a large and growing part of EU’s renewable energy mix. In 2016, nearly half the renewable energy produced in the EU came from burning woody biomass and the demand is expected to increase with RED II.

The case argues that not only the uncounted CO2 emissions from this biomass are undermining efforts to address climate change, but subsidies for biomass are increasing the demand and therefore the logging of forests in Europe and North America. The plaintiffs represent areas that have been hit particularly hard, such as the US Southeast, Estonia, and the Carpathian Mountain forests in eastern Europe where some of Europe’s last remaining primeval forests are being logged.

The suit is being filed by plaintiffs from Estonia, France, Ireland, Romania, Slovakia and the USA. The plaintiffs are bringing the case based on the detrimental impacts from logging and biomass burning they have already experienced and anticipation of future impacts if financial support for bioenergy continues to soar.

“The transformation of the Renewable Energy Directive was the EU’s chance to deal with some of the most egregious problems associated with biomass bioenergy, such as increasing forest harvests and burning whole trees and stumps. On this they largely failed, so it is now up to citizens to take the EU to court and get this disastrous decision turned around” said Hannah Mowat, campaign coordinator at Fern, a Brussels-based NGO working on forests and rights.

For more information about the case and a background on each of the plaintiffs, go to www.eubiomasscase.org.