Letter Regarding Use of Forests for Bioenergy (February 11, 2021)

The undersigned scientists and economists commend each of you for the ambitious goals you have announced for the United States, the European Union, Japan and South Korea to achieve carbon neutrality by 2050. Forest preservation and restoration should be key tools for achieving this goal and simultaneously helping to address our global biodiversity crisis. We urge you not to undermine both climate goals and the world’s biodiversity by shifting from burning fossil fuels to burning trees to generate energy.

For decades, producers of paper and timber products have generated electricity and heat as by- products from their process wastes. This use does not lead to the additional harvest of wood. In recent years, however, there has been a misguided move to cut down whole trees or to divert large portions of stem wood for bioenergy, releasing carbon that would otherwise stay locked up in forests.

The result of this additional wood harvest is a large initial increase in carbon emissions, creating a “carbon debt,” which increases over time as more trees are harvested for continuing bioenergy use. Regrowing trees and displacement of fossil fuels may eventually pay off this carbon debt, but regrowth takes time the world does not have to solve climate change. As numerous studies have shown, this burning of wood will increase warming for decades to centuries. That is true even when the wood replaces coal, oil or natural gas.

The reasons are fundamental. Forests store carbon – approximately half the weight of dry wood is carbon. When wood is harvested and burned, much and often more than half of the live wood in trees harvested is typically lost in harvesting and processing before it can supply energy, adding carbon to the atmosphere without replacing fossil fuels. Burning wood is also carbon-inefficient, so the wood burned for energy emits more carbon up smokestacks than using fossil fuels. Overall, for each kilowatt hour of heat or electricity produced, using wood initially is likely to add two to three times as much carbon to the air as using fossil fuels.

Increases in global warming for the next few decades are dangerous. This warming means more immediate damages through more forest fires, sea level rise and periods of extreme heat in the next decades. It also means more permanent damages due to more rapid melting of glaciers and thawing of permafrost, and more packing of heat and acidity into the world’s oceans. These harms will not be undone even if we remove the carbon decades from now.

Government subsidies for burning wood create a double climate problem because this false solution is replacing real carbon reductions. Companies are shifting fossil energy use to wood, which increases warming, as a substitute for shifting to solar and wind, which would truly decrease warming.

In some places, including Japan and French Guiana, there are proposals not just to burn wood for electricity but to burn palm or soybean oil. Producing these fuels requires expansion of palm or soybean production that leads to clearing of carbon dense tropical forests and reduction of their important carbon sink, both of which add carbon to the atmosphere.

“Sustainability standards” for forest or vegetable oil management cannot alter these results. Sustainable management is what allows wood harvest to eventually pay back carbon debts but cannot alter these decades or even centuries of increased warming. Similarly, any increased demand for vegetable oil adds to the global pressure to clear more forests already created by rising food demands.

Making countries responsible for emissions from land use changes, although desirable, cannot alone fix laws that treat burning wood as carbon neutral because these national responsibilities do not alter the incentives created by those laws for power plants and factories to burn wood. In the same way, the fact that countries are responsible for emissions from diesel fuel use would not fix a law encouraging trucks to burn more diesel on the flawed theory that diesel is carbon neutral. Both treaties that shape national climate responsibilities and each country’s energy laws that implement them must accurately recognize the climate effects of the activities they encourage.

Your decisions going forward are of great consequences for the world’s forests because if the world supplied just an additional 2% of its energy from wood, it would need to double its commercial wood harvests. There is good evidence that increased bioenergy in Europe has already led to greatly increased forest harvests there. These approaches also create a model that encourages tropical countries to cut more of their forests – as several countries have pledged to do – undermining the goals of globally accepted forest agreements.

To avoid these harms, governments must end subsidies and other incentives that today exist for the burning of wood whether from their forests or others. The European Union needs to stop treating the burning of biomass as carbon neutral in its renewable energy standards and in its emissions trading system. Japan needs to stop subsidizing power plants to burn wood. And the United States needs to avoid treating biomass as carbon neutral or low carbon as the new administration crafts climate rules and creates incentives to reduce global warming.

Trees are more valuable alive than dead both for climate and for biodiversity. To meet future net zero emission goals, your governments should work to preserve and restore forests and not to burn them.

PDF version of the letter including the list of all initiators 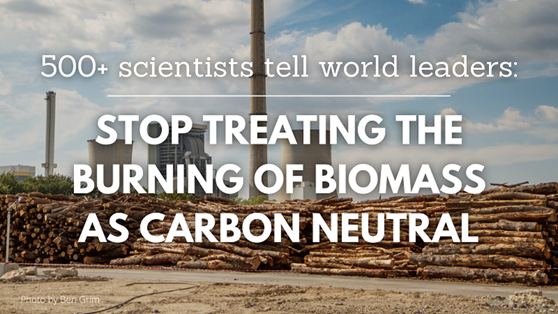