Romania hosts the largest tracts of virgin forests within the EU. But they are vanishing due to industrial logging, corruption and corporate greed. However, this major nature tragedy is almost unknown in wider Europe. Therefore, EuroNatur Foundation and Romanian environmental organisation Agent Green organised an expert conference in the European Parliament in Brussels on the 8th November. The conference was hosted by Thomas Waitz and Benedek Jávor, both Member of the European Parliament.

Benedek Jávor opened the conference with the words: “Virgin forests have a special importance in Europe, not only for biodiversity but also for ecosystem services… In Romania they are under huge pressure not only from illegal logging, but also from legal logging. Deforestation is closely related to corruption issues and problems with governance. Low level of governance and high level of corruption contribute to legal and illegal logging.”

Thomas Waitz then also  gave a clear introduction: “I am a forester, I’m not against logging as such.” He had been in Romania in May 2018 upon invitation from EuroNatur and Agent Green. During this trip he also talked to corporations and found out that forest areas are massively overlogged. In national parks the non-core protected areas, so called buffer zones should not be larger than 25% of the area. In Domogled National Park, which he also visited, the buffer zone is bigger than 50%. Only a third of the park’s forests are under strict protection. “There are rules how forestry interventions should look like. As I am a professional, I could see what sort of interventions they did.” But “…they are not even applying their own weak rules.”

Gabriel Paun, president of the NGO Agent Green, also pointed out, that the deliberate destruction of virgin forests and Natura 2000 sites is happening with support of the Romanian government. In 14 years only 10% of the mapped virgin forests (Pin Matra study in 2004) have been put into the National Catalogue of Virgin Forests.

Gabriel Schwaderer, CEO of EuroNatur Foundation agreed that something is going wrong in Romania: “We consider this (National Catalogue) as a great tool… But we are wondering if it´s applied in the right way. And to be frank with you, sometimes I have the feeling that it´s not used really to protect those forests legally. But it´s is rather used to exclude as much as possible from it. And I have the question why only 21,000ha are inscribed in it, so many years after adopting this ministerial order” (in 2012).

Paun also said: “We put much hope after seeing the Bialowieza case that the EU will find ways to have a strong intervention to help save what´s left of our forests, which are also a European treasure.”

His hope will be supported as Humberto Delgado Rosa, Director of Natural Capital with DG Environment of the European Commission said: “You can see my presence as the proof that we do pay attention to this.” The reports by NGOs and media about logging of Romanian forests are “definitely a reason for EU concern. We do pay attention to his… We will monitor the situation as we did in Bialowieza. And we do have some new tools to monitor it better, including satellite technology…”

He stressed that “the reports by NGOs, the images and the presented documentaries about logging in Romania are unsettling, shocking and outrageous. He also made it clear that “all old growth forests” in Europe “require a non-intervention approach”.

With Natura 2000 sites there is a need for “better implementation…But the enforcement remains a challenge.” For the EU infringement procedure “We need some data gathering and we need to have some evidence that convinces us internally in the Commission.”

Sadly, Thomas Waitz added that the Romanian MEPs were invited to the conference, but none showed up: “as you can see… there is no Romanian MEP in the room. So it seems to be either a hurtful topic for them or they don´t care…”

Romanian EU-presidency: spotlight in the case

Gabriel Schwaderer concluded: “The Romanian virgin forests are vanishing while we speak. It´s a key European matter, thus EU involvement is crucial. The Romanian EU-presidency in 2019 will also give a spotlight on this case. We call on EU institutions to help and push to save this treasure. We see clear evidence of systematic violation of nature directives and call on EU institutions to act. He informed the audience that IUCN is also looking more deeply into the situation in Romania.

Raising the Alarm for Romanian Forests from AGENT GREEN on Vimeo.

The largest tracts of virgin forests within the EU are found in Romania. But due to industrial logging, corruption and corporate greed, this most valuable European natural heritage is rapidly vanishing. Forest destruction even occurs within national parks and Natura 2000 sites.

However, very few people are aware of this major nature crisis. Therefore, EuroNatur Foundation and Romanian environmental organisation Agent Green will come to Brussels to raise the alarm and deliver first hand evidence of the logging of virgin forests to both the European institutions and the public.

On November 8, 2018, EuroNatur and AgentGreen will create a “spotlight on vanishing virgin forests of Romania” in Brussels with the following events:

– Banner action in front of the European Commission building: Schuman square / roundabout, 8:00 – 9:00am.

Please join us in Brussels in support of Europe’s last virgin forests and share! 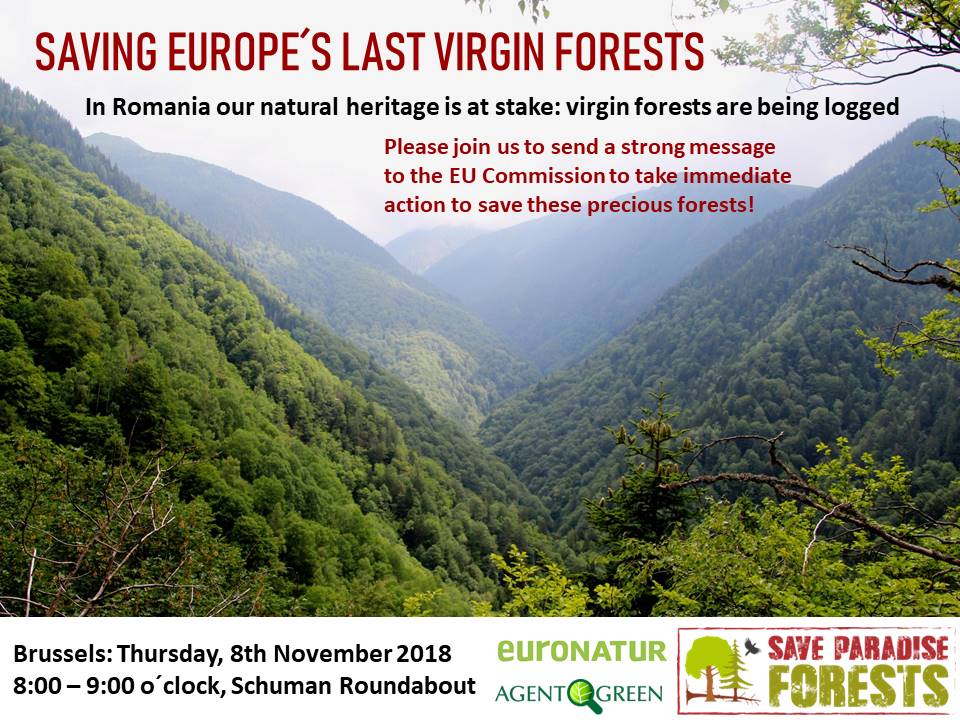 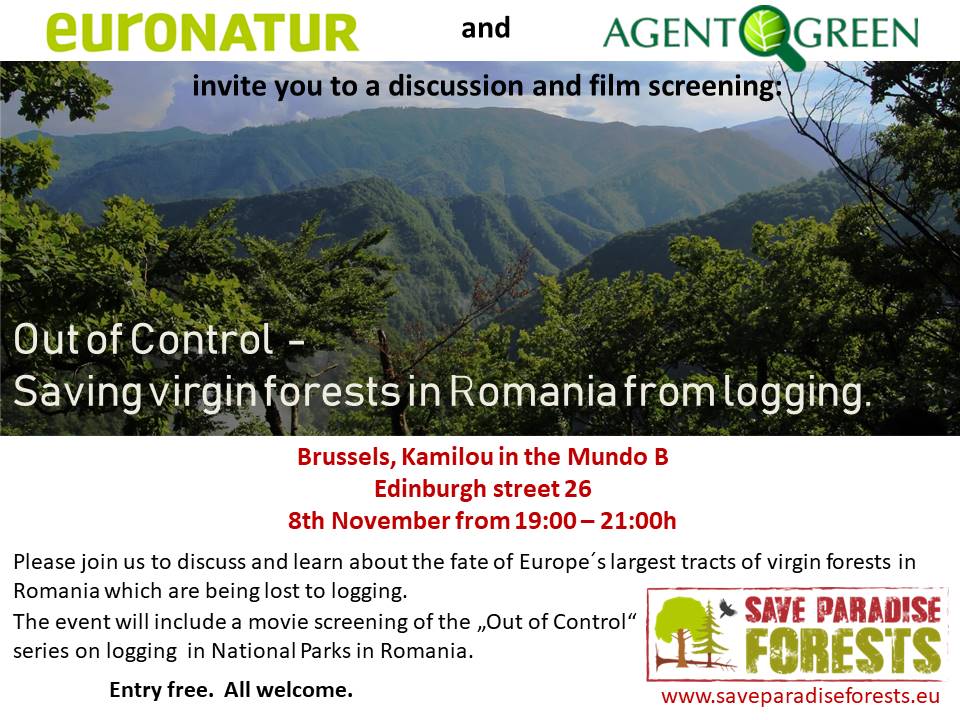 While primary forests have gradually disappeared from the European natural heritage, Romania still have some great forests formed after the last ice age. They remained untouched till recently. Political incompetence and corporate greed puts these forests under massive threat. Only about 10% of all primary forests were included in the National Catalog of Virgin Forests. The public funds allocated years ago to map and preserve these forests have been used for other purposes. The situation is out of control.

Thomas Waitz, Member of the European Parliament (Greens), will visit primeval forests in Romanian national parks and Natura 2000 sites in May 2018. He states: “The Romanian government allows primeval forests to be destroyed for profit’s sake. As in Bielaowieza, this is not only a national disaster but violates European law. We will not tolerate this any longer.” Waitz, who is an Austrian farmer and forest owner, is a member of the Agriculture and Petitions Committee n the European Parliament.

In order to collect more intelligence about the situation on the ground Waitz will join forces with the NGOs EuroNatur and Agent Green and undertake a fact finding mission to Romania. “I’ll take a look at the extent of the destruction in May. If the reports prove true, I will do my utmost to launch an EU infringement procedure against Romania. “

He wil also visit the Cernisoara area in Domogled – Valea national park. This is a wild river basin, hosting a large untouched forest. Not even a  trail  is leading into this remote paradise forests. There are only a few pathless mountain valleys left in whole EU. The wild landscape reminds on scenes from movies such as Jurassic Park or Lord of the Rings.

But the primeval forest in Cernisoara section (Radoteasa, Vlasia and Carbunele valleys) is largely not protected yet, although it is located in the middle of the national park. It is owned by the Romanian State which issued logging approvals there through the Ministry for Environment, Ministry for Forests and the state forests manager, Romsilva. Road building and harvesting of old stands started in 2017. More is planned in 2018.

The eradication of primeval forests in Romania is Europe’s biggest and most pressing nature conservation drama today. But almost nobody is taking notice. If no action is taken now, many of these valuable forests will be gone within the next 2 to 3 years.

EuroNatur and Agent Green call on the Romanian government to immediately halt commercial logging in all Romanian national parks, to include all primeval and old growth forests in national parks in the core zones and to adopt a modern, independent and well-funded national park management system.
Also the EU needs to get proactively engaged in saving this precious European natural heritage.