In the heart of Romania’s largest national park – Domogled-Valea Cernei – a large piece of pristine virgin forest wilderness has survived until today: the wild woodland of Cernisoara. The natural forest complex is larger than 1500 ha, a rare phenomenon in heavily managed Europe. But only a part of this natural gem is under proper protection. Logging permissions are up for auction and logging bulldozers might enter this paradise place soon…

At the bottom of Cerna valley, civilisation has left its traces: summer pastures, a dirt road, ruins of failed touristic projects and a large hydro lake (from communist times). But if you look uphill, you see a different world: large, wild forests. Some of the side vallyes of Cerna river are outstanding, pathless wilderness, covered by rich virgin forests with centuries old trees. Unfortunately only a fraction of this outstanding wilderness gem of European is protected, even though it is located in the middle of a national park and a Natura 2000 site.
Most of the park’s territory is owned by the Romanian state. The national park administration is financed and controlled by state forestry agency Romsilva. The result of this configuration is not the safeguarding of nature, but rather the opposite: a strong motivation for exploitation. Today, only 50% of the entire park is protected.  Half the park does not differ from logging sites outside the national park. Domogled is just one example of this management tragedy; the situation in other national parks is no different.
In early 2017 Romsilva issued permits for logging in several virgin and old growth forests within the national park. The national park administration did not object to the planned destruction. In April 2017 logging tractors entered the remote wilderness in Cernisoara forest complex and they began to cut a brutal forest road into the pristine western slope of upper Radoteasa valley. For the first time ever, the large wilderness was opened for destruction.

Just recently, in October 2018, Romsilva auctioned four more parcels of virgin forests in Radoteasa valley to be cut down and sold. One of these parcels, No. 25 (see below), has been identified as virgin forest area (“paduri virgine”) by a WWF inventory in 2016. The wild forest also has been  submitted for inclusion into the Romanian forest protection programme: “National Catalogue of Virgin Forests”.

But now some of these paradise forests have appeared on the cutting list. Unfortunately, only parts of the Cernisoara virgin forest haven been put under the protection shield of the park’s “core zone”. A large area (500 ha) of forest which is identical with the forest included in the core zone is unprotected and threatened by logging. 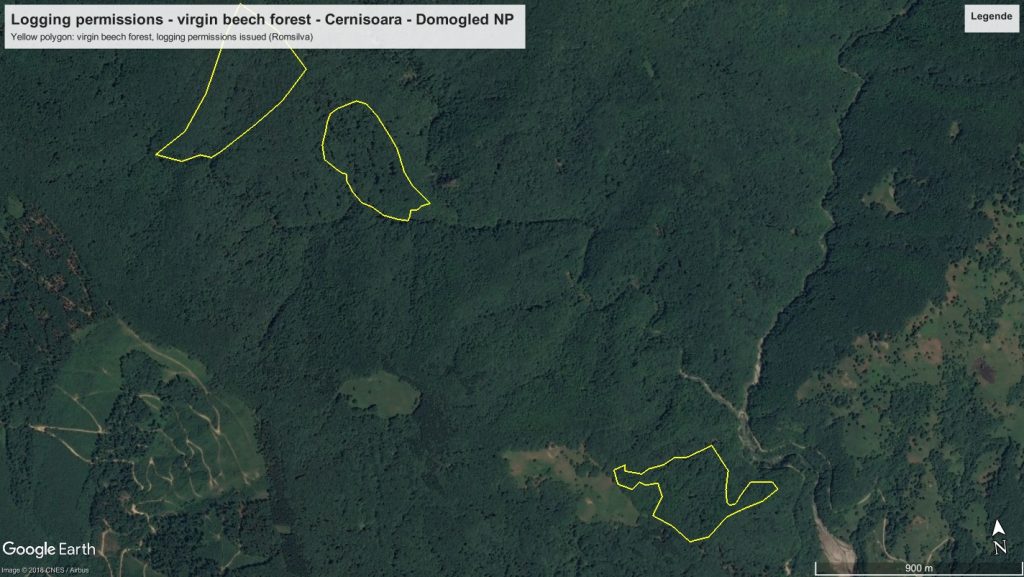 Romania hosts the largest tracks of virgin forests in EU…
An estimated 100,000 – 200,000 hectares of forest have so far not been altered significantly by humans. But they are vanishing rapidly. Even in Romania’s national parks and Natura 2000 sites logging of natural forests is progressing. Logging, both legal and illegal is a big problem. But most of the deterioration or degradation of virgin forests is happening with the official permission of Romsilva, with forest authorities and with the full endorsement of the Romanian government.
This logging tragedy in Romania is the biggest nature crisis in the EU today…
Cernisoara forest protected – or not?
In May 2018, Member of European Parliament Thomas Waitz visited the Cernisoara virgin forests upon invitation from EuroNatur and Agent Green. Romsilva’s Head of Nature Conservation, Dragos Mihai, also joined the trip. He was asked whether the wilderness of Radoteasa could be protected. He signalled – in the presence of Romanian conservationists from Agent Green and Austrian journalists – that the old forest will be included in the strictly protected core zone of the national park.
Are at least parts of Cernisoara forest safe now? Unfortunately, Dragos Mihai’s words were obviously not worth a lot. Most likely Romsilva never gave up their logging intentions. In the meantime, government officials have also confirmed in a letter to Romanian Senator Mihai Goţiui that forest exploitation in Cernisoara shall proceed..
In other words: Europe’s last large tracks of virgin forests are being systematically destroyed with the full, official endorsement of the Romanian government.
Cutting of virgin forest in a UNESCO site’s buffer zone?
Domogled national park also hosts the largest share of Romanian components parts of the UNESCO World Heritage Site which protects Europe’s last virgin and old growth beech forests. The almost 500 ha unprotected complex of Cernisoara virgin forest complex does not differ at all from the forests protected within the UNESCO site. Even close to the boundaries of the UNESCO World Heritage Site “Ancient and Primeval Beech Forests of the Carpathians and Other Regions of Europe” forest parcels have been listed for logging.
The whole national park is designated as a “buffer zone” of the World Heritate site. Romsilva argues that logging in the buffer zone is legally viable. But is logging of virgin forest really acceptable in the buffer zone of a UNESCO World Heritage site? 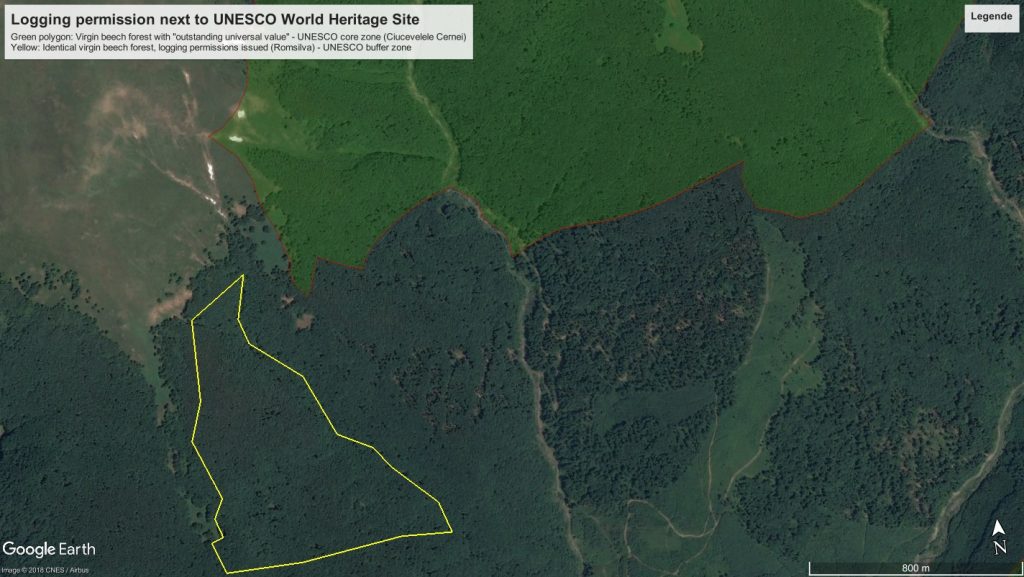 Europe’s eyes will be on Romania in 2019 when it  hosts the EU-presidency. EuroNatur Foundation and Agent Green call on both the Romanian government and the EU Commission to take urgent action to preserve this outstanding natural heritage.
Please sign the petition to save Romania’s virgin forests!

While primary forests have gradually disappeared from the European natural heritage, Romania still have some great forests formed after the last ice age. They remained untouched till recently. Political incompetence and corporate greed puts these forests under massive threat. Only about 10% of all primary forests were included in the National Catalog of Virgin Forests. The public funds allocated years ago to map and preserve these forests have been used for other purposes. The situation is out of control.

Thomas Waitz, Member of the European Parliament (Greens), will visit primeval forests in Romanian national parks and Natura 2000 sites in May 2018. He states: “The Romanian government allows primeval forests to be destroyed for profit’s sake. As in Bielaowieza, this is not only a national disaster but violates European law. We will not tolerate this any longer.” Waitz, who is an Austrian farmer and forest owner, is a member of the Agriculture and Petitions Committee n the European Parliament.

In order to collect more intelligence about the situation on the ground Waitz will join forces with the NGOs EuroNatur and Agent Green and undertake a fact finding mission to Romania. “I’ll take a look at the extent of the destruction in May. If the reports prove true, I will do my utmost to launch an EU infringement procedure against Romania. “

He wil also visit the Cernisoara area in Domogled – Valea national park. This is a wild river basin, hosting a large untouched forest. Not even a  trail  is leading into this remote paradise forests. There are only a few pathless mountain valleys left in whole EU. The wild landscape reminds on scenes from movies such as Jurassic Park or Lord of the Rings.

But the primeval forest in Cernisoara section (Radoteasa, Vlasia and Carbunele valleys) is largely not protected yet, although it is located in the middle of the national park. It is owned by the Romanian State which issued logging approvals there through the Ministry for Environment, Ministry for Forests and the state forests manager, Romsilva. Road building and harvesting of old stands started in 2017. More is planned in 2018.

The eradication of primeval forests in Romania is Europe’s biggest and most pressing nature conservation drama today. But almost nobody is taking notice. If no action is taken now, many of these valuable forests will be gone within the next 2 to 3 years.

EuroNatur and Agent Green call on the Romanian government to immediately halt commercial logging in all Romanian national parks, to include all primeval and old growth forests in national parks in the core zones and to adopt a modern, independent and well-funded national park management system.
Also the EU needs to get proactively engaged in saving this precious European natural heritage.