When one thinks of the natural wonders of Europe, Romania does not necessarily spring to mind as a country home to some of the largest areas of forests of outstanding universal value. However, hosting at least 500,000 hectares of potential primary and old-growth forests (Schickhofer and Schwarz 2019), Romania is easily home to the lion’s share of intact forests in the European Union outside of Scandinavia. Few would appreciate that Romania is home to some of the largest and healthiest populations of large carnivores – bears, wolves and lynx – in all of Europe. However, these ancient forests are being logged before the eyes of the European Union (EU), even at a time when the European Commission has communicated its intent to step up action to protect and restore the world’s forests. Logging, both legal and illegal, is occurring in Natura 2000 sites, national parks and in the buffer zones of UNESCO World Heritage areas, immediately adjacent to the core inscribed properties. The impacts on the integrity of the World Heritage property are undeniable.

In 2007, Europe’s ancient beech forests were first inscribed in the World Heritage List, with sites in Slovakia and the Ukraine forming a cross-border property Primeval Beech Forests of the Carpathians. This site was extended to Germany in 2011, and then 10 countries successfully added further forest sites to the property – now known as Ancient and Primeval Beech Forests of the Carpathians and Other Regions of Europe – in 2017. This uniquely complex serial site now covers 92,023 ha across more than 40 protected areas located in 12 European countries. The Romanian component of this 2017 extension (23,983 ha) disproportionately comprised almost 40% of the 10-country addition (61,660 ha) to the existing site. In total, Romanian forests make up 26% of the entire 12- country World Heritage listing, making it by far the largest contribution from a country in the EU.

These component areas were added to the World Heritage List under criteria (ix) of the World Heritage Convention as they are “outstanding examples representing significant on-going ecological and biological processes in the evolution and development of terrestrial, fresh water, coastal and marine ecosystems and communities of plants and animals”. The Romanian components are described, amongst other rich ecological and biodiversity values, as including important refuges of virgin forests, being of a high degree of naturalness, and supporting a vast array of plants and animals including endemic, rare and threatened species (Kirchmeir and Kovarovics 2016).

However, the Romanian forest sites included in the list certainly do not represent all forests of outstanding universal value. Many forests sites of equal natural value as those included in the property are being logged and under threat from future logging activities.

2017 Romania’s forest areas added to Ancient and Primeval Beech Forests of the Carpathians and Other Regions of Europe World Heritage Listing (Decision 41 COM 8B.7)

Nov. 2019 World Heritage Centre/IUCN Reactive Mission to Romania. Further forest parcels adjacent to the World Heritage auctioned by Romsilva, Romania’s state forest agency only 10 days after the mission is due in Romania.

For decades, scientists and conservationists have been raising the alarm about the scale and intensity of logging in Romania and the government’s abject lack of serious commitment to protecting natural values. The situation today, where ancient forests of outstanding universal value continue to be logged, is the consequence of years of terrible forest governance – over-logging, illegal logging, corruption, mismanagement and a ubiquitous defiance of the rule of law. Even in 2017, when the Romanian sites were nominated to be listed, IUCN and World Heritage Centre specialists raised concern over the Romanian government’s lack of commitment to the World Heritage Convention and the protection of outstanding universal values of natural sites.

As a result, commercial logging which threatens the integrity of the UNESCO site through habitat fragmentation and loss continues. At the time of writing, it has been revealed that more forest areas within the UNESCO buffer zone and adjacent the UNESCO listed site – forests containing values equivalent to those within the UNESCO site – will be auctioned at the end of November 2019 and logged in 2020.

Domogled – Valea Cernei National Park in south-west Romania harbours towering limestone mountain peaks, natural thermal springs, deep gorges, spectacular waterfalls, impressive cave systems, large tracts of ancient, pristine forests and critical habitat for a plethora of protected plants and animals. It contains three component parts of the Ancient and Primeval Beech Forests of the Carpathians and Other Regions of Europe World Heritage site: Coronini – Bedina, Iauna Craiovei and Ciucevele Cernei. The entire national park outside of the core UNESCO site constitutes the formal buffer zone of the site. The situation in Domogled – Valea Cernei National Park is probably the best understood and also the most serious in regards to commercial logging adjacent the World Heritage site and within the site’s formal buffer zone. 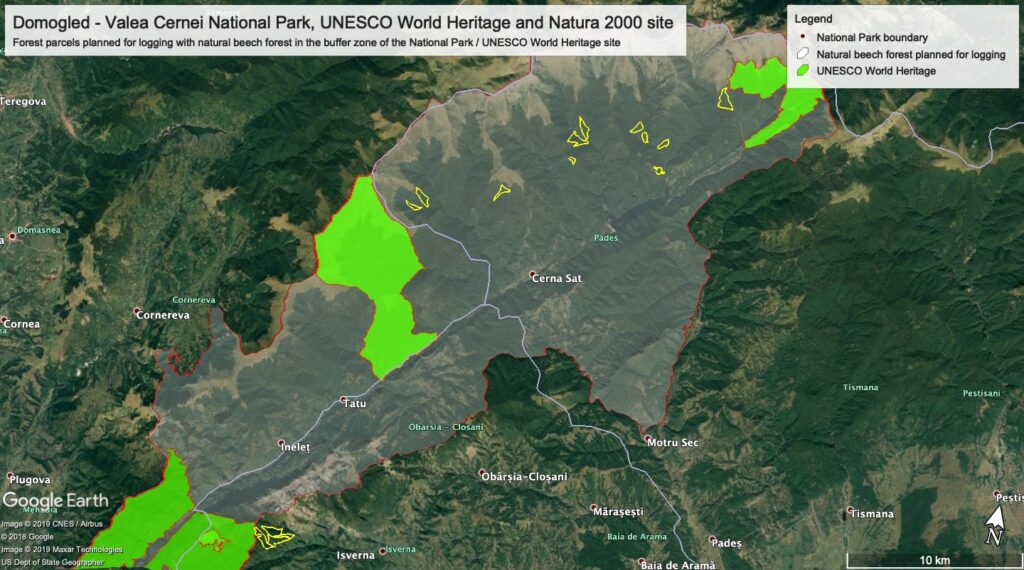 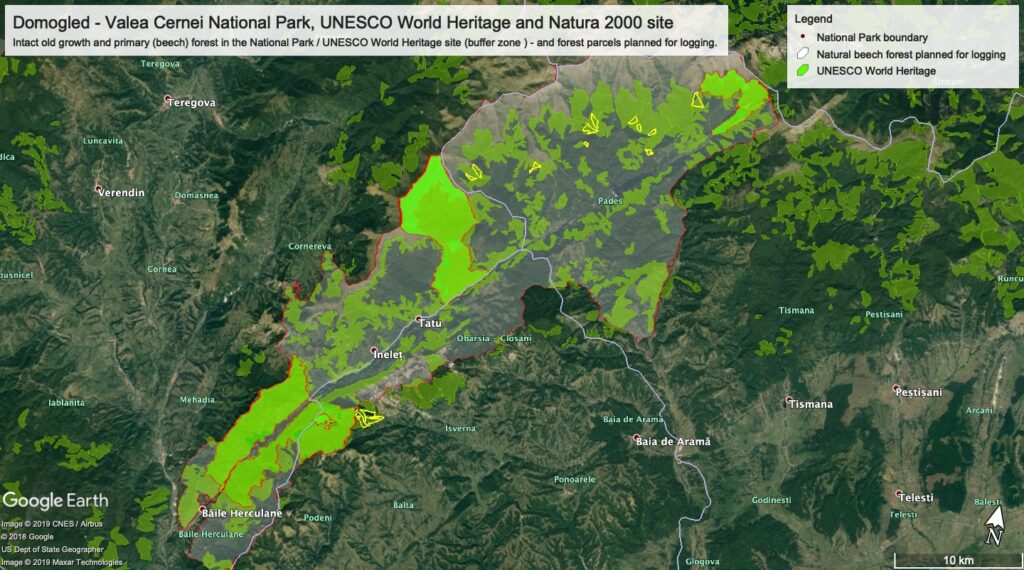 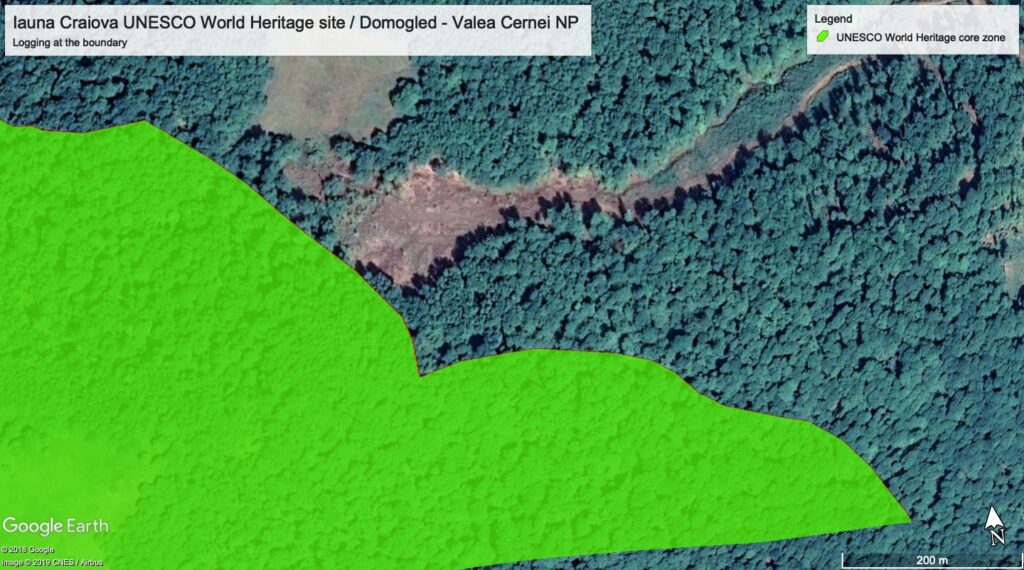 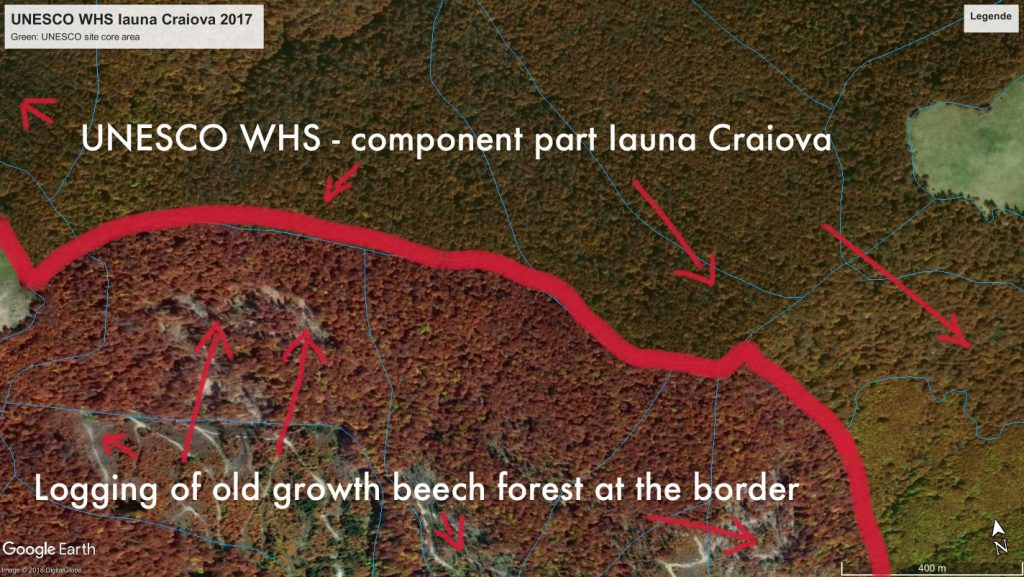 Park management staff openly talk about commercial logging within the park as if it is completely normal. Forest management is intense and commercially driven. It is mainly based upon “progressive cutting” (stepwise removal of all trees of a forest parcel over a period of 10 years) or “conservation logging” (cutting of openings in the forest to stimulate growth of young trees). This “progressive cutting” simply means that rather than an area being completely cut in one go, it is cut over a period of about 10 to 15 years. According to the World Heritage Centre, “a buffer zone is an area surrounding the nominated property which has complementary legal and / or customary restrictions placed on its use and development to give an added layer of protection to the property” (UNESCO WHC, 2017).

In many parts of the park, virgin forests that are supposed to be protected under Romanian law but have not yet gone through the difficult bureaucratic process of listing them, are illegally logged without effective criminal prosecution. Even in the strict non-intervention zones of the park, illegal logging has taken place.
In 2017, logging and road cutting was identified in virgin forests in the upper catchment of the pristine Cerna River. More recently, excursions to the park – including with members of the European Parliament, and during an informal visit with the European director of IUCN – have revealed firsthand the devastating commercial logging within the park. Logging progresses into the remotest areas of the park where the last strongholds of ancient beech forests are found. Only in the spring of 2017, a new logging road was cut in the Radoteasa valley, in the middle of a large untouched forest landscape, which is located between two UNESCO World Heritage site component parts.

These future logging plans, supported by the previous Romanian government, represent a clear disregard for UNESCO values and for the World Heritage Convention. It is not clear yet how the new government will deal with the progressing logging issue in Romania’s protected areas. Any deliberate damage to a component part in one of the participating countries threatens the 12 country property as a whole and the Romanian government’s ongoing logging plans, which undermine the entire property, could lead to the property being listed “In Danger” in the future.

Romania’s ancient forests are a true treasure of European natural and world heritage. Urgent intervention is required to ensure that as much of what remains of them is protected for all time.

We encourage the World Heritage Committee to support the protection of Romania’s ancient beech forests of outstanding universal value.
We respectfully urge the WHC to request the Romanian government to uphold the values of the World Heritage Convention through the following actions:

· All logging permits in old-growth and primary forests in national parks and UNESCO World Heritage site buffer zones to be cancelled and logging activities to be stopped immediately;
· All old-growth and primary forests in the national park and UNESCO World Heritage site buffer zones be preserved as designated non-intervention areas (eg. core zones enlarged, UNESCO sites expanded, National Catalogue of Virgin Forests properly implemented). As almost all forests within the UNESCO buffer zones are under the management and ownership of the Romanian state, this should be achievable without the need for financial compensation for private land owners;
· National Parks and UNESCO World Heritage sites be promoted as places where nature conservation is paramount and adequately funded and world’s best practice management prioritises the protection, promotion and restoration of natural ecosystems, not the exploitation of natural resources.

Schickhofer, M. and Schwarz, U. (2019). PRIMOFARO. Inventory of Potential Primary and Old-Growth Forest Areas in Romania. Report for EuroNatur.